This extension is configurable via the roam/js/tag-cycle page.

For every cycle you want, make a block denoting the keyboard shortcut that will trigger that cycle. Then as children of that block, create one block for each text in the cycle.

Now when you're in a given block, the keyboard shortcut will replace text in your block based on the cycle you defined!

The format of a keyboard shortcut is deliminated by +. The following modifiers are supported:

Additionally, could use "SHIFT", but it should added after the modifier. The Key pressed is the last component.

This is what it would look like for Roam's native TODO/DONE cycle:

Here is what I use for my project tracking: 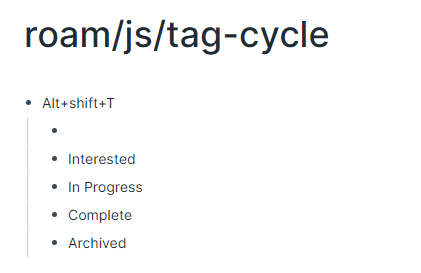 Note that this means entering an empty block will clear the previous element, and append the next element when no other element is found. Blank bullets only append a text to the block when it is a part of only **one** keystroke.

If instead of tags, you would like to cycle through raw text, add RAW to the end of the shortcut. Like this:

Front could combine with some of the other modifiers above. So to fully reproduce Roam's native tag cycle, it would look like this:

If you change the blocks on the configuration page, the changes will take effect as soon as you navigate away from the blocks.